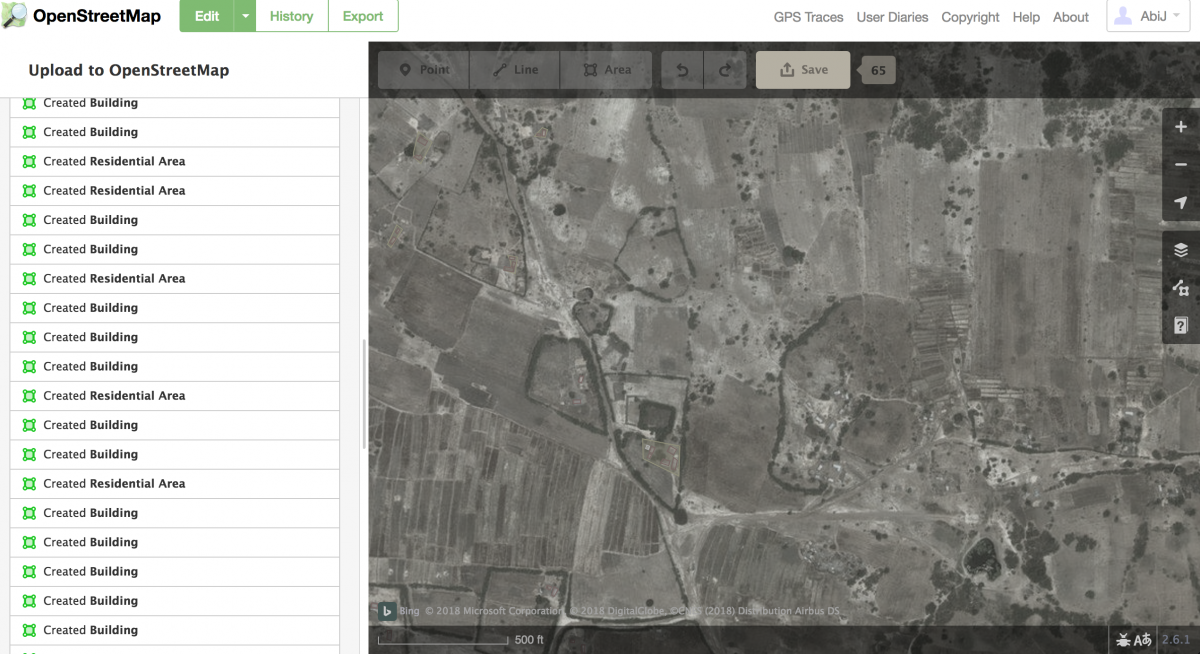 In this post I give a brief insight into Crowdsourcing as it is used in the Digital Humanities and also describe my experience of using three open source, crowd-sourced mapping tools:

In her blog post on Crowdsourcing and Community Engagement Alicia Peaker quotes Enrique Estelles-Arolas and Fernando Gonzales-Ladron-de-Guevara’s definition of crowdsourcing:

“A type of participative online activity in which an individual, an institution, a nonprofit organization, or company proposes to a group of individuals of varying knowledge, heterogeneity, and number, via a flexible open call, the voluntary undertaking of a task.”(Crowdsourcing and Community Engagement)

This definition provides a fairly accurate description of the projects I recently contributed to as I experimented and explored some crowdsourced activities and open mapping for humanitarian causes.

Peaker remarks on ‘how enthusiastically public audiences respond to a well-defined project to which they can contribute through an expertly designed interface’, so my question when approaching the tasks was to see to what extent these are well designed interfaces and to what extent my response, as a new user, can be measured in terms of enthusiasm.

In the blog post Digital Humanities and Crowdsourcing: An Exploration from the Museums on the Web conference 2013 , the authors identify two main types of Crowdsourcing projects. Open Mapping falls under ‘Crowdsourcing projects that require the “crowd” to integrate/enrich/reconfigure existing institutional resources’ as opposed to ‘create/contribute novel resources’. The activity required of the crowd is ‘locating’, i.e. ‘placing given objects in physical space….. and providing information on locations’ (Digital Humanities and Crowdsourcing).

What exactly is Open  Mapping ?

Open mapping is the use of open sourced street maps that allow contributors to interact with the map in a number of ways. This varies according to the mapping project and application but in Open Street Map for example a new unschooled citizen cartographer such as myself can edit features on the map, re-naming places and streets and adding and verifying new features according to local knowledge. In this way I was able to edit the map of my local area of Cork city, Sundays Well , renaming Daly’s Bridge to its colloquial name “The Shakey Bridge”,adding in the location of a lifebuoy and updating the name of a local restaurant as well as adding my favourite local café to the map. 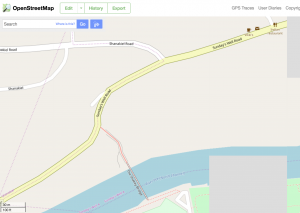 As a complete newcomer to open street mapping I found this to be quite an empowering,fun and potentially addictive activity. Up until a few weeks ago I was not aware that there were any alternatives to Google Maps and the democratisation and non commercial ethos of open source, crowd sourced mapping appeals to me. I have always been fascinated by maps and the possibilities they present in terms of what features we may choose to display as well as the concept of deep mapping –  a way of integrating many layers of information – is one to which open street mapping can open a door.

However, I was surprised at the speed at which the changes I made took effect. On the one hand it was frustrating that they did not appear instantly and that there was no pop-up window confirming I had actually succeeded in making an edit. On the other hand when I checked 24 hours later the changes were in place and this too surprised me in that no further verification was required.Genuine local knowledge is not a pre-requisite for participation. The system is therefore trust based and therefore open to abuse. The mischievous side of me is tempted to enter some false information inorder to test how long it would be before it were corrected. I wonder how many regular users there are of OSM and how much traffic to the site.There is an optional system of validation – the user can opt for this – and on the map of Cork City Centre there are numerous queries for features requiring verification. I responded to one by verifying the location of the DH lab – a query that was set 7 years ago!

Humanitarian Open Street Maps is open to users registered on OSM. Its stated purpose is in times of crisis or disaster, to use the community of mappers on a voluntary basis in order to ‘create, online, the maps that enable responders to reach those in need’.

It wasn’t that simple to find my way to the HOTOSM site or navigate to the start. You need to go to ‘Task Manager’. Once in , I chose to map at Beginner level a project of high priority that had already been 65% mapped and therefore had a higher chance of overall completion in my opinion. 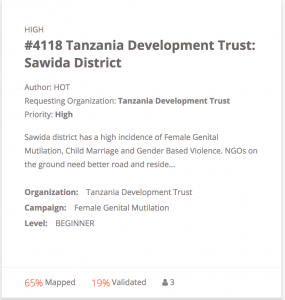 I realised quickly that it was important that I could align with the ethics of a project before participating in the mapping and so I chose the “Female Genital Mutilation ‘ campaign by the Tanzania Development Trust , Sawida District.

I also realised it was important to me that the mapping project offered some prospect of success in terms of completion. This project had a helpful Youtube video explaining what I had to do : map buildings and roads. It looked straight forward enough. 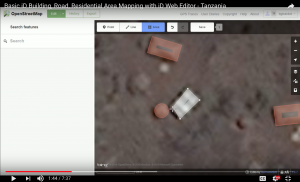 What I wasn’t prepared for was how hard it would be and how long it would take me to complete a tile.The size of the tile was daunting for a beginner and although it was clumsy and laborious at first and I did find it a good way to slow down. With practice I got faster but after an hour and a half I still had not mapped all the buildings or even begun on the roads. 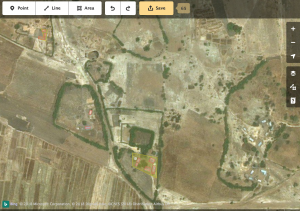 It required intense concentration and at all times I was acutely aware that these were real people’s homes and this made me concerned that I was performing the task incorrectly. I felt enormously responsible and anxious that if I didn’t get it right or if I missed somewhere that someone who needed assistance might literally ‘fall off the map’. This anxiety and a certain amount of guilt – I didn’t want to give up on people just because I could – compelled me to continue for longer than I might have for a non-humanitarian project but ultimately I couldn’t finish the tile. I never did get as far as mapping the roads and hope that a more skilled mapper will finish it off.

MapSwipe is an app for mobile phone or tablet and is not dissimilar to HOTOSM in that its purpose is to map areas for Humanitarian aid and Development. After a brief tutorial you get offered an area to map and are presented with a series of tiles to map, marking according to what you see and then swipe to move on.

This was the first mapping application I tried and I was immediately confronted with questions to myself around ethics and personal values when deciding which project to choose. I opted for a project to eliminate malaria in Angola that required the mapping of buildings. However I found the

pictures on the Tutorial to be quite poor quality and there were so many instructions that it was tempting to give up before I’d even started. I think this was largely due to the frustratingly small size of the interface I was using – a mobile phone. This is much too small for a mapping project and when I looked at it on a friend’s tablet it was much clearer. On the phone it was hard to get a context and I couldn’t see anything properly. I was constantly squinting at poor quality photographs of bush land.

What was irritating is that I kept being presented with tiles of similar landscape despite constantly swiping because I couldn’t identify anything. There seemed to be no way of opting for an alternative section of map.

The app has a gamification element but it appeared meaningless because I got to level 3 without identifying anything, only swiping.

I got very frustrated with this app but due to the humanitarian aspect, the real or at least perceived value of the activity I persisted, determined to find a building ! ( I never did find one).

I enjoyed this exploration into open source mapping and humanitarian mapping. I definitely won’t be using MapSwipe again but OSM and HOTOSM have opened up a whole new world, a world I can be part of mapping if I choose. I value the contribution it is possible for an individual to make both to their locality and towards humanitarian responses.Despite my initial enthusiasm I can’t see this becoming a regular pastime of mine but I could see myself participating in communal real time ‘mapathons’ alongside others, in the same room as well as linked up across the globe. That would give me an increased sense of purpose and connectivity as well as the reassurance of progression and task completion.